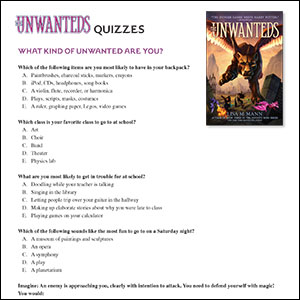 Every year in Quill, thirteen-year-olds are sorted into categories: the strong, intelligent Wanteds go to university, and the artistic Unwanteds are sent to their graves.

On the day of the Purge, identical twins Alex and Aaron Stowe await their fate. While Aaron is hopeful of becoming a Wanted, Alex knows his chances are slim. He’s been caught drawing with a stick in the dirt-and in the stark gray land of Quill, being creative is a death sentence.

But when Alex and the other Unwanteds face the Eliminators, they discover an eccentric magician named Mr. Today and his hidden world that exists to save the condemned children. Artimé is a colorful place of talking statues, uncommon creatures, and artistic magic, where creativity is considered a gift… and a weapon.